Home » Automotive » 7/. THE RACE FOR AUTONOMOUS VEHICLES AND IN-VEHICLE INFOTAINMENT 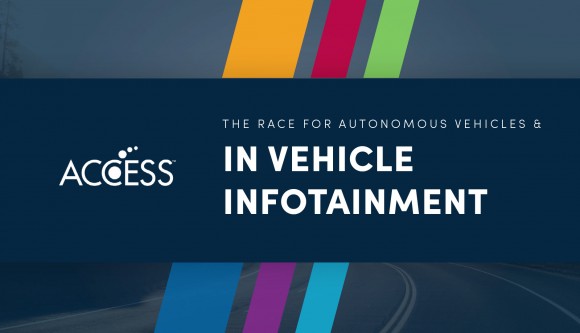 This is the seventh part of a series of blog posts we’re publishing over the next few weeks on the topic of “The In-Car Roadmap: A Definitive Guide to IVI.” Subscribe to our Automotive Newsletter to be notified when the next instalment of the series is available. A PDF version of this blog can be downloaded here.

As connected cars become the norm, the network effect of AV on the world’s roads will create a new wave of automotive services which can potentially benefit society through increased safety, improved navigation, faster journey times and a reduction in pollution levels.

Ask any two senior executives within the automotive industry when autonomous vehicles will arrive to market, and the answers will almost certainly differ. What is clear is that it’s a race that everybody is keen to win!

For the last 130 years of the automobile, changes such as the automatic gearbox and electric driven train have dramatically shifted the balance of industry. However, the 1.2 billion vehicles that travel the world’s roads all have the commonality of a driver behind the wheel.

So that we are all on the same page, autonomous vehicles are not a one-size-fits-all concept but exist on a spectrum of capabilities. Figure 1. provides a neat summary of the levels of automation based on guidelines from the Society of Automotive Engineers.

Tests of level 4 vehicles are taking place now with Waymo (Google) and Baidu (owner of China’s largest search engine) often cited as leaders in this area. However, every major car company has level 4 cars in development, either directly or through joint ventures such as Cruise (GM) and Zenuity, a joint venture between Ericsson, Volvo and Autoliv. There are certainly other level 4 vehicles undergoing field trials and potentially even level 5 vehicles that are under wraps that may well start to enter private-road trials later this year.

A 2017 Brookings Institution report estimated that from August 2014 to June 2017, a total of nearly $80 billion was invested in field of autonomous vehicles. That figure is the equivalent in modern terms of what the US spend on space vehicles for the Apollo Moon landings between 1960 and 1973 – and it’s only likely to grow further over the next few years.

To understand why fifth level AV is such a game changer, it is worth putting it within the context of the wider transportation sector. In the US, 65% of all consumable goods are moved by road and driver employment costs, which accounts for its largest single expense. Even without moving to fully electric trucks, McKinsey & Co, a consultancy, estimates with full autonomy, operating costs would decline by about 45 percent, saving the US for-hire trucking industry between $85 billion and $125 billion. Scaling this saving globally could potentially equate to hundreds of billions in savings for an industry worth $1.2 trillion.

In an AV world, the global automated taxi market might be worth more than $2 trillion a year by 2030 according to UBS Group AG analysts. The impact may ripple through retail with ‘next day delivery’ being supplanted by 30-minute delivery via AV for everything from food to medical supplies. The changes to the $5.5 trillion global logistics market could be profound.

However, AV is not just about replacing drivers with machines to strip out cost. The technology could shift how consumers purchase vehicles by moving towards on-demand, as-a-service models. With full AV, journey patterns may well change as an hour long travel to work via mass transit networks (bus and train) – evolves to a AV taxi that picks up multiple workers that are travelling to and from the similar geographic locations and transports them all collectively by road to a convenient drop off point. Though an ‘Uber’ style app, this new version of car-pooling may end up being faster, more comfortable and cheaper than current mass transit networks.

In this scenario, the IVI needs to be individualised with separate screens and audio outputs, say via Bluetooth, to cater for each passenger, in an air travel style model. Vehicles may need to offer a ‘built-in’ AV – i.e. libraries of content with different language options – to reduce 5G bandwidth while still offering consumer comfort.

From a connected car, IVI and RSE perspective; level 5 autonomy is a major game changer. Consider GM’s ‘Cruise Origin’, a car that has no steering wheel or driver compartment that is currently starting road trails. The internal passenger space provides an ideal space for entertainment, Wi-Fi connectivity and work while traveling.

Designed predominantly for ride sharing schemes, Cruise Origin is part of an upcoming generation of vehicles where passenger comfort will be a key delineator between brands. In a similar mould as the airline industry, the process of onboarding passengers, running through safety checks and in-drive services will not be conducted by a flight crew, but will ultimately be driven by in-vehicle screens and connected applications.

Nice to have becomes must have

At this junction, IVI becomes the primary method for a whole range of tasks related to safety, comfort, support, entertainment and value-added service that are tied to data. A vehicle that knows who you are, where your journey started and where you are going is a gold mine for businesses that are centred around consumer data. This understanding explains why one of the biggest investors in AV is Google through its Waymo subsidiary.

As vehicles such as Cruise Origin enter service, and start to form autonomous networks of vehicles, the whole industry starts to gain value from the network effect. As AVs start to become standardised – gaining the ability to share information between vehicles such as location, occupancy, traffic conditions and journey patterns – it may be that it starts to replace not just local transit systems but potentially short haul flights as well.

As the IVI becomes the primary interface for service access, the need to standardise the interface increases. In the same design language that places a steering wheel, pedals, gear sticks and dashboard in a certain aspect and iconography within a traditional car, the IVI of the AV era must exhibit the same ethos. This is to ensure that a passenger stepping into a Volkswagen, Ford, Toyota or plethora of emerging brands can access both navigation and entertainment features with ease. In doing so, architectures can be built seamlessly, integrating with voice, multiple languages and third-party services in a secure and scalable fashion.

By 2040, there will be over 2 billion cars in use and it is likely that autonomous vehicles will make up most new car sales. Brands that can deliver true value-added benefits to drivers and passengers will be able to capitalise on an untapped market. Those that don’t will be letting a great opportunity slip through their fingers. For the IVI, the arrival of AV is a game changer and shifts the perception of the technology from luxury to necessity. In the future, it will gain the same relevance as operating systems such as Android or iOS. The big question is when? If the tech industry has taught us anything, it will probably be sooner than you think…

Subscribeto our Automotive Newsletter to be notified when the next instalment of this blog series is available.

Processing…
Success! You're on the list.
Whoops! There was an error and we couldn't process your subscription. Please reload the page and try again.