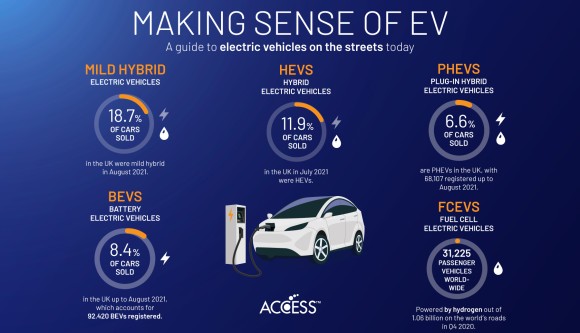 When it comes to how vehicles are powered, the industry is moving in a cleaner, greener direction. Automotive OEMs are thinking beyond the long-used internal combustion engine towards electric vehicles (EVs). But there is a wide array of EVs available and countless acronyms to describe and differentiate them.

Getting your head around all these acronyms is not always easy, so we have put together this guide to explain the types of EVs available today, how they work, and how many are actually in use.

Battery Electric Vehicles (BEVs)
No gas engine – this car is powered only by a battery (zero emissions). Most BEVs are capable of fast charging and Level 2 (L2) charging – see here for an explanation of charging methods.

Hybrid Electric Vehicles (HEVs)
The car generates its electricity from regenerative braking to charge the batteries to power the electric motor. HEVs can travel typically 1-2 miles before a gas-powered engine kicks in and are really good for cities where there’s a lot of stop-start driving. It’s a low-emission vehicle too. The downside? It cannot be powered with electric chargers.

Plug-in Hybrid Electric Vehicles (PHEVs)
PHEVs have an electric motor and a larger battery than HEVs. They can run anywhere from 10-40 miles before the gas engine starts, at which point the car becomes more like an HEV. In true hybrid style, it has both a gas tank and a charging port. It has a longer range than battery electric vehicles (BEVs), but the batteries add weight, making it less economical on a motorway.

Mild Hybrid
Mild Hybrids replace the alternator and starter with an electric motor. As with HEVs, the car typically generates its electricity from regenerative braking to charge the batteries that power its motor, and typically reduces fuel consumption by turning off the engine when the car is coasting, braking or stopped. However, it cannot start moving using electricity alone. A gas-powered engine is required to move the vehicle.

Numbers on the road:
Up to August 2021, there were 206,173 mild hybrid electric vehicles registered in the United Kingdom. That accounts for 18.7% of all UK sales.

Fuel Cell Electric Vehicle (FCEV)
Power is generated by converting the chemical energy of hydrogen into mechanical energy by mixing it with oxygen in a fuel cell. It is perhaps the cleanest car available – the exhaust output is H2O, and hydrogen is readily available, which is not the case for lithium which is used in batteries. Hydrogen is fed into the car at refuelling stations, similar to petrol stations, but the refuelling infrastructure is not yet in place to support FCEVs on a mass scale.

Range extender
Powered purely by an electric motor, but with a small diesel or petrol engine that is used to recharge the batteries (the engine doesn’t drive the wheels at any point). It provides an extra 70-100 miles of range once the batteries have run dry, but the engine’s extra weight means the batteries are drained quicker than with a BEV.

Numbers on the road:
We couldn’t find any definitive data for range extenders, which almost certainly means there aren’t many.

Since 1984, ACCESS CO., LTD. (Tokyo Stock Exchange First Section Index, 4813) has been providing advanced IT solutions centered on mobile and network software technologies to telecom carriers, consumer electronics manufacturers, broadcasting and publishing companies, the automotive industry and energy infrastructure providers around the world. The company develops mobile software solutions that have been installed on over 1.5 billion devices, and network software solutions that have been used by more than 350 companies. Utilising its network virtualisation technology expertise and knowledge, the company is currently focusing on the development and commercialisation of Internet of Things (IoT) and media solutions that combine embedded and cloud technology. Headquartered in Tokyo, Japan, the company maintains subsidiaries and affiliates in Asia, Europe and the United States to support and expand its business globally.. Follow him on Twitter / Linkedin