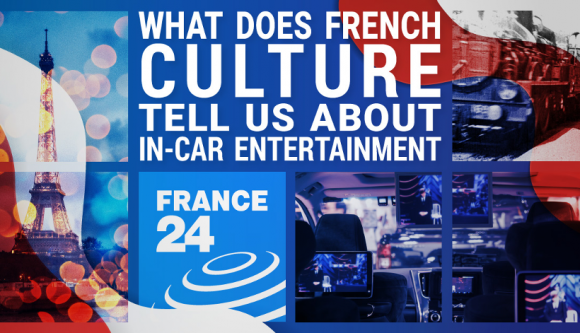 France has an incredibly strong culture, with some important lessons for anyone interested in providing in-car entertainment services.

First, there’s cinema: France can claim to have invented it through ‘The Arrival of a Train at La Ciotat Station,’ created by the Lumière brothers, a short film first screened in 1895. Today, French-language movies shot in France is a huge industry, punching above its weight. For instance, the number of movies produced in France exceeds the numbers produced in every other European country (https://www.statista.com/statistics/252727/leading-film-markets-worldwide-by-number-of-films-produced/ ).

In literature, art, fashion and other creative arts, France is incredibly powerful globally. The French government, and European Directives, protect the TV industry with legislation that ensures TV shows are produced in French and distributed effectively. Cinema is also protected by strict windowing rules – that have only been relaxed following the COVID-19 pandemic. And there is even legislation on the language of songs played on the radio!

I believe that the French government does all of this for a number of reasons. It knows that the French cinema and TV viewers want local language content and want stories that say something to the nation. It knows how important the creative arts are economically. And finally, the government is aware of the importance of ‘soft power’ in today’s geopolitical climate.

So, what does this mean for the car? At NAB 2019, we joined up with the EV manufacturer BYTON and David Couret, Technical Director of content company France24, to discuss ‘Turning the car into a tailored entertainment hub’ ( https://www.platformcomms.com/access-drives-the-future-of-in-car-infotainment-at-nab-show-2019/ ). During this session we showed how the rise of in-car connectivity is driving a wave of innovation for the media and entertainment industries and transforming the relationship between automakers and the consumer.

As part of that discussion, we all agreed that car users will continue to want entertainment in their own language wherever they are in the world. They want content that speaks to them. And finally, news and location-based content will be even more important in the car than the living room.

Whether or not governments around the world protect their creative industries as well as the French is not really the point. What really matters is that the car OEMs running in-car entertainment services can provide consumers with what they want: local content that is informative, topical, entertaining and speaks to them, whatever their country of origin or wherever they are in the world.

This is why we are putting so much effort into ensuring that the ACCESS Twine™ for Car App Store has leading content brands from around the world. Yes, Netflix and YouTube are great – but on their own they are not enough to keep the world’s car users entertained, as automotive OEMs strive to build incredibly strong relationships with passengers and drivers, whatever their culture and location.