Home » Automotive » Will the car be the next stage of the Streaming Wars? 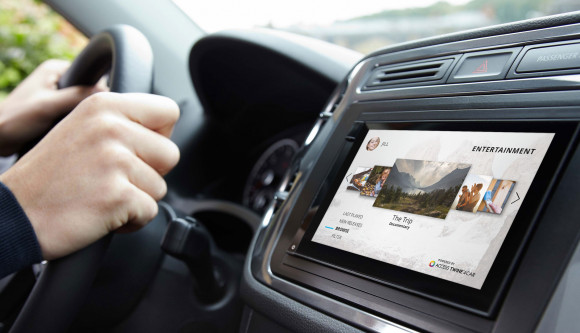 The streaming wars are heating up and big-hitters like Netflix and Disney+ are focussing attention on their Originals offerings whilst others like Peacock and HBO Max are about to enter the scene and AVOD service like Pluto TV and Tubi grow in popularity.

This is demonstrated by the huge sums being ploughed into new programming, with Netflix estimated to have spent $15 billion on originals last year. According to data from Omdia, that sum resulted in 657 first-run original titles, up from 386 in 2018, and total first-run original hours of 2,769, compared to 1,537 in 2018, a year-on-year increase of 80%. Disney+, meanwhile, has said it will spend $1bn on original programming in 2020. Newer entrants to the streaming market boast similar spending: HBO Max put its originals figure at $2bn for 2020 and Peacock has earmarked $2bn over two years.

But is such spending sustainable? Data from Statista says that the average 25-34 year old – AKA the biggest TV viewers – in the U.S. watched 3.13 hours of TV and video per day in October 2018. Lockdown will have temporarily boosted this figure but the streaming wars are set to rage beyond the cocooning period, begging the question, is there too much content being produced? Addressing this question, Netflix CEO Reed Hastings has long talked about Netflix competing in the attention economy in which his enemies include the likes of Fortnite and sleep – in other words, he needs to get viewers watching more, implying there is presently more content being produced than the audience needs.

So how can the content industry expand the average viewership hours per day? The age of the connected car is one answer. Data from Counterpoint Research suggesting that 75% of cars will be connected to the Internet by 2025, with the vast majority utilising 5G networks. Why is 5G so significant? With the car acting as a reliable 5G access point, it will become the centre of a new connected hub, rather than simply being a conduit for a mobile device. As Reed Hastings might have put it, time sitting watching nothing in a car – a competitor in the same way as sleep and Fortnite – can now be spent enjoying Netflix and other premium services.

For the likes of Netflix, Disney+, Amazon Prime and the other major streaming services, the connected car will provide increased reliability and performance across an entire journey. It will also offer better viewing experiences through new and enlarged screens in the head unit (HU) and via rear-seat entertainment (RSE), and with high quality surround-sound audio. Best of all for the major streaming services, with global content strategies, positioning themselves in the mass-market automotive supply chain will open the door to a new, global audience.

But how does a major streaming service take advantage of such a green field? The solution is harder than you may think due to the very different working methods of the industries involved. First, you have the automotive sector which produces vehicles that require years of planning and building; Second, you have the software systems that are more important than ever, built with a silicon-valley mindset and continually evolving through regular updates. Third, you have the world of content in which regional and international licencing arrangements tend to be incredibly complex.

The crucial bridge between content and the car is provided by an In-Car Entertainment system such as ACCESS Twine™ for Car (Twine4Car), which provides a unique in-car app store and boasts a global content portfolio that includes international and local radio, audio and video content. The software is built on ACCESS’ experience of implementing software in over 1.5 billion Consumer Electronics (CE) devices including vehicles and that of its sister company, NetRange, in providing app stores for CE manufacturers in over 100 countries.

Via its flexible and end-to-end software and global approach, ACCESS offers a unique gateway into the car for content services. Thanks to solutions such as Twine4Car, the main players in the streaming wars have an opportunity to extend their scope to a new, untapped global audience and increase the most valuable commodity of all: viewing time. Meanwhile OEMs and Tier 1s in the automotive sector have an opportunity to forge new, ongoing digital relationships with users plus long-term service-based revenues. With production lines gearing up to roll out millions of new connected cars with large screens and ship them across the world, there may never be a better opportunity for streaming companies to stake a claim in this valuable future.